Here are some interesting articles and blog posts I’ve run into over the last week (January 21 to January 27, 2019):

Here are some interesting articles and blog posts I’ve run into over the last week (January 14 to January 20, 2019):

Here are some interesting articles and blog posts I’ve run into over the last week (January 7 to January 13, 2019):

Not too long ago, a friend of mine said this on twitter:

I hate when I create a repo in GitHub and start a README file. Than when I work on code locally that I want to push to that repo, I can never figure out how to do it so I end up deleting the remote and starting from scratch.

I started thinking to back when I was starting with git and some of the struggles I had, especially when starting a new project.

My current workflow is to start whatever project I’m working on locally, commit locally, then create an empty repo on GitHub and push to it.

If I was creating a new dotnet application, here are the steps I’d take:

Copy a .gitignore file from another, similar project

Head to Github and create an empty repo named MyTestApp. I don’t NOT let github add a README or gitignore file since I’ve already done that locally. 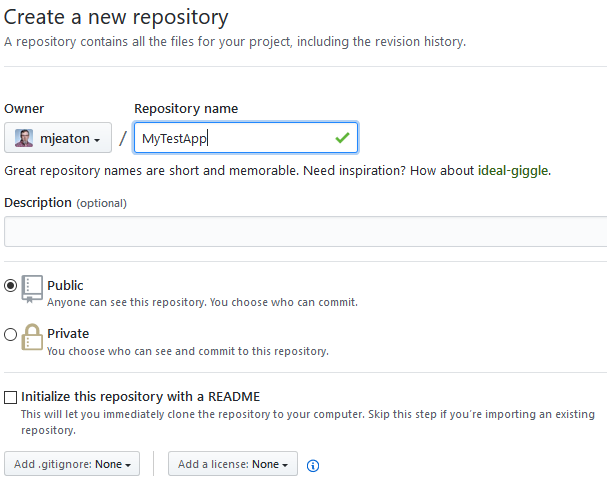 But, back to the original question–what happens if you create the empty repo with the README, but you’ve also started a README locally?

In this case, I’ll create my repo first

Head to Github and create an empty repo named MyTestApp2. This time, I will let github create a README.

Doing that should have given an error that the destination path already exists:

fatal: destination path ‘MyTestApp2’ already exists and is not an empty directory.

That makes sense, but if you find yourself with a local working copy AND a GitHub repo and you want to keep the contents of both and link your local stuff to the GitHub repo?

From your project folder, do the following:

At this point, you have connected your local directory to github.

What happens if you try to add and push now?

You get a big error, right?

To github.com:mjeaton/MyTestApp2
! [rejected] master -> master (non-fast-forward)
error: failed to push some refs to ‘git@github.com:mjeaton/MyTestApp2’
hint: Updates were rejected because the tip of your current branch is behind
hint: its remote counterpart. Integrate the remote changes (e.g.
hint: ‘git pull …’) before pushing again.
hint: See the ‘Note about fast-forwards’ in ‘git push –help’ for details.

This means “origin” is ahead of your local repo; GitHub has newer files than what is on the local computer. To fix it, you need to pull from GitHub.

I have history on GitHub and history locally and somehow have to get things reconciled. Ok, so how do I get past that? Simple.

Running that command works, BUT now I’m told there’s a merge conflict. Since we made changes to README.md in both places, I expected this.

All you need to do is use your merge tool/diff tool of choice and take care of the conflict.

As soon as I take care of the conflict, I can commit the change and push to master. Everything is now at a point where I can start my normal workflow using git.

I started by describing my process for starting a new project that uses GitHub: create the repo, clone it, start working. I find this is the most straightforward way to get a new project up and running.

After that, I talked a little bit about how to handle those times when a repo is created on GitHub AND locally, with changes in both places. I covered at least one method to handle the conflicts that arise without deleting the project and starting over, but there are others.